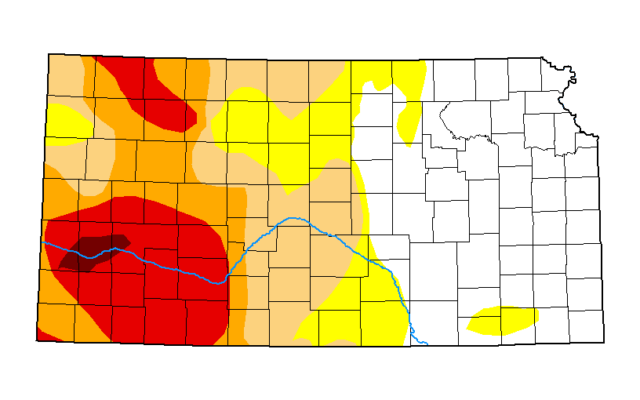 The weekly US Drought Monitor showed expansion of severe drought in Northwest Kansas as well as moderate drought and abnormal dryness in the south-central part of the state.  As of Tuesday morning, Gove County had entered the second stage of drought, forming a bridge between the two areas of severe and worse drought that have occupied large areas of western Kansas for months.  As a result, 29.2 percent of Kansas is now in severe or worse drought.  Areas of extreme and exceptional drought were unchanged from a week ago.

Moderate drought now covers a majority of Barber County, along with the southern edge of Harper County.  Abnormal dryness expanded east to now cover all of Sumner County and Sedgwick County west of the Arkansas River.  The southwestern corner of Harvey County has also entered pre-drought conditions.  18.8 percent of Kansas is in the first stage of drought, while another 15.2 percent is classed as abnormally dry.

The U.S. Drought Monitor is jointly produced by the National Drought Mitigation Center at the University of Nebraska-Lincoln, the United States Department of Agriculture, and the National Oceanic and Atmospheric Administration. Map courtesy of NDMC.